It was a long time plan that I go to Chidambaram with my family. Chidambaram is approximately 4.5 hours or 245 km away from Chennai. The city is a major pilgrimage city. The famous Chidambaram temple is situated here. The ancient Chidambaram Temple (Tamil: சிதம்பரம் கோயில் ) is dedicated to Lord Shiva in his form of the cosmic Dancer (Nataraja நடராசர்). It is one of the five dancing halls (Sabha) of Nataraja and the most famous one. Chidambaram is the Kanaka Sabha (Golden Hall). It is also one of the Panchabhoota Sthalams – representing five basic elements. This is the Akasa Sthalam representing ‘Space’ among the Pancha Bootha Sthalams. For Saivites all over the world this is the most important Siva Temple. The stand alone word “Kovil” would automatically mean Chidambaram Temple to Saivites. The others are – Tiruvannamalai (Thejo sthalam – Fire) Kanchipuram (Prithvi sthalam – Earth) Srikalahasti (Vayu sthalam – Air) Tiruvanaikaval (Trichy) (Appu sthalam – Water).

The temples at Kalahasti, Kanchipuram and Chidambaram all stand on a straight line at 79′ 45″ east longitude – truly an engineering, astological and geographical wonder. The Chidambaram temple houses the Akasha Lingam of Shiva and is considered one of the greatest Shiva Temples of Tamil Nadu. The Govindaraja shrine adjacent to the Nataraja Shrine was constructed in 1639 C.E. by a Cholas. Nataraja in Chidambaram Temple has been sung by many Tamil saints including the Tevaram Trio – Sambanthar, Tirunavukkarasar, Sundaramurti Swamigal. Manikkavacakar attained Mukti in Chidambaram by becoming one with Nataraja. The other Saiva saint of importance who attained mukti here is Nandanar. Nandanar, born in a caste of untouchables became exalted by his bhakti, that even the most conservative Brahmins of Chidambaram worshipped him. Chidambaram hosts the most ancient set of the 108 Karana stone carvings, the key dance movements of Nataraja. The temple complex is spread over 40 acres (160,000 m2) in the heart of the city. Many thousands of devotees come to this auspicious temple to pay homage to the dancing Shiva. 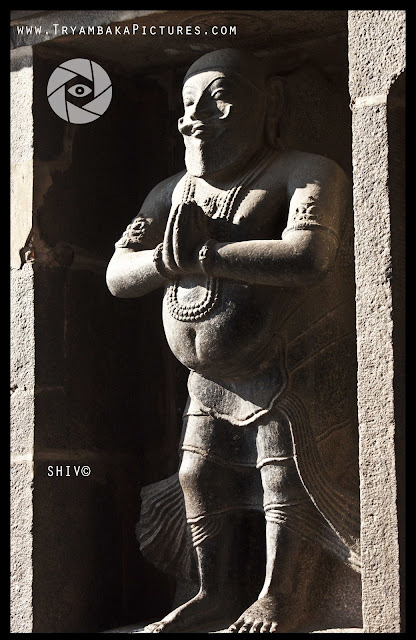 I did not know much information about the temple and I have to borrow from Wikipedia. Thanks to them. The one thing that Wikipedia had missed is about the Chidambara Ragasya (Secret). Being the most important secret information, I do not wish to reveal it here. It actually displays the wealth and spirituality exhibited by the Kings of that time. 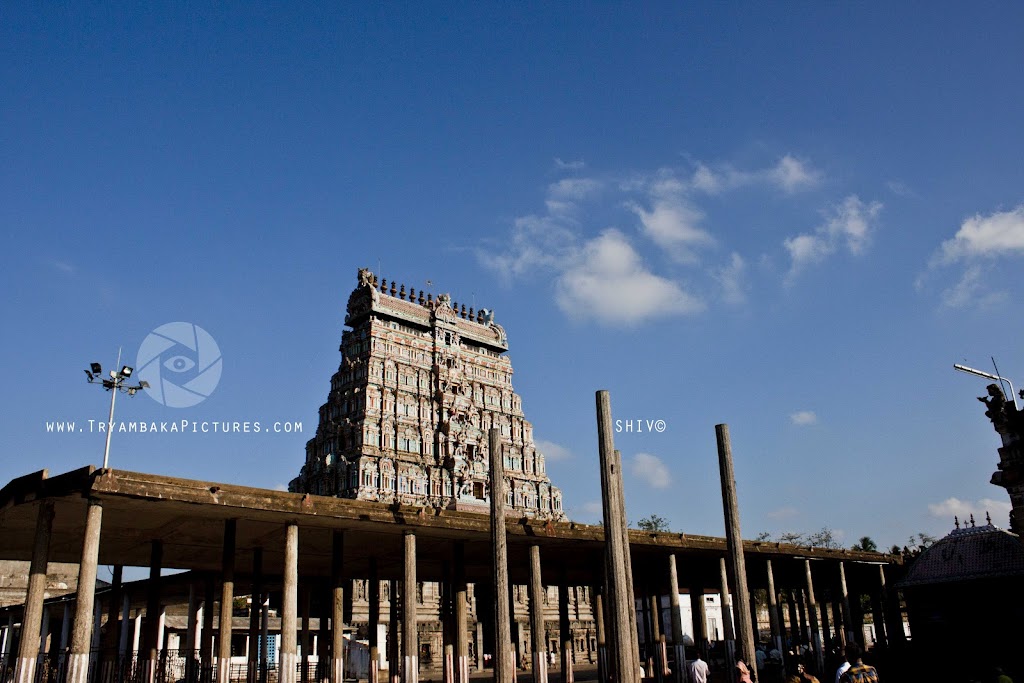 The Gopura of the temple has got amazing sculptures carved in. Below is one such sculpture. It displays the grand skills of ancient south Indian sculptors. It has undergone recent renovation and a fresh coat of paint has been given which adds beauty to it. 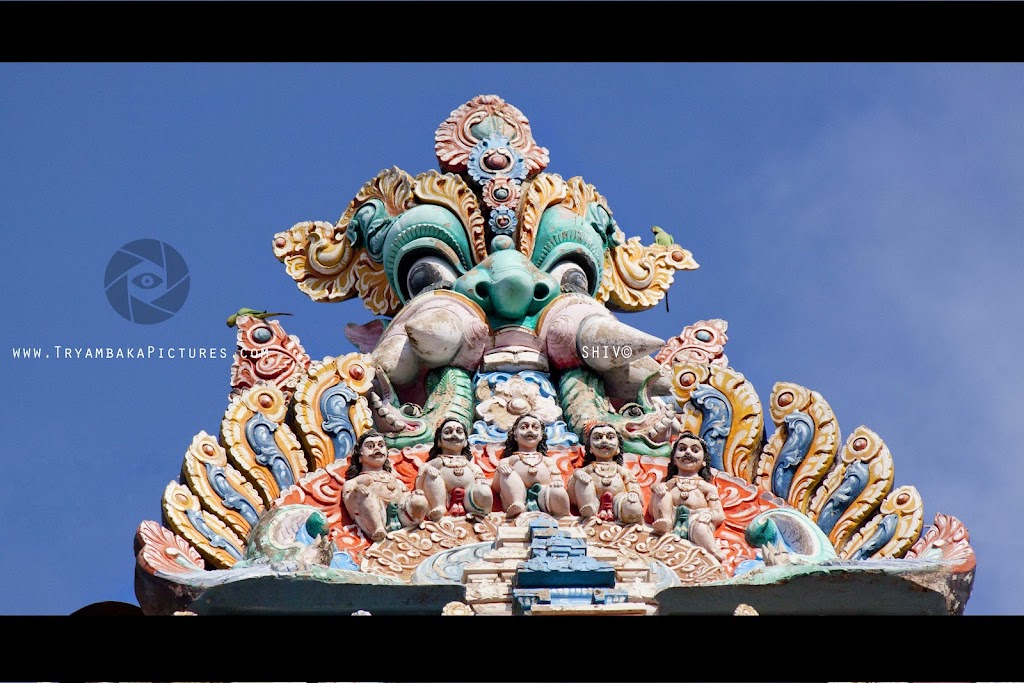 There are also many more sculptures in the temple which are fascinating. Below is one such of Lord Kali. 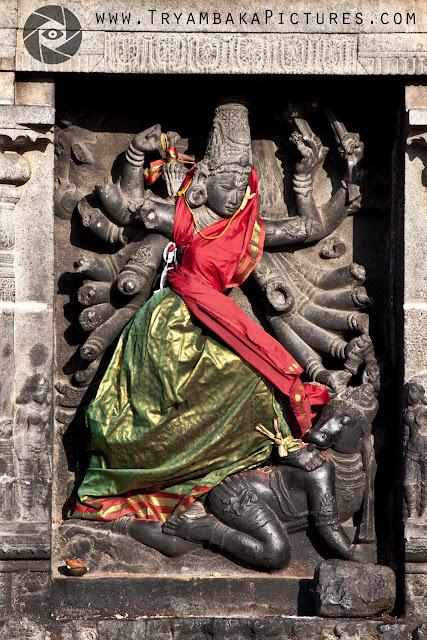 The temple has a large water tank. It is sacred to take dip in this tank. You can so many people take the holy dip. The water tank is located near the northern tower of the temple. 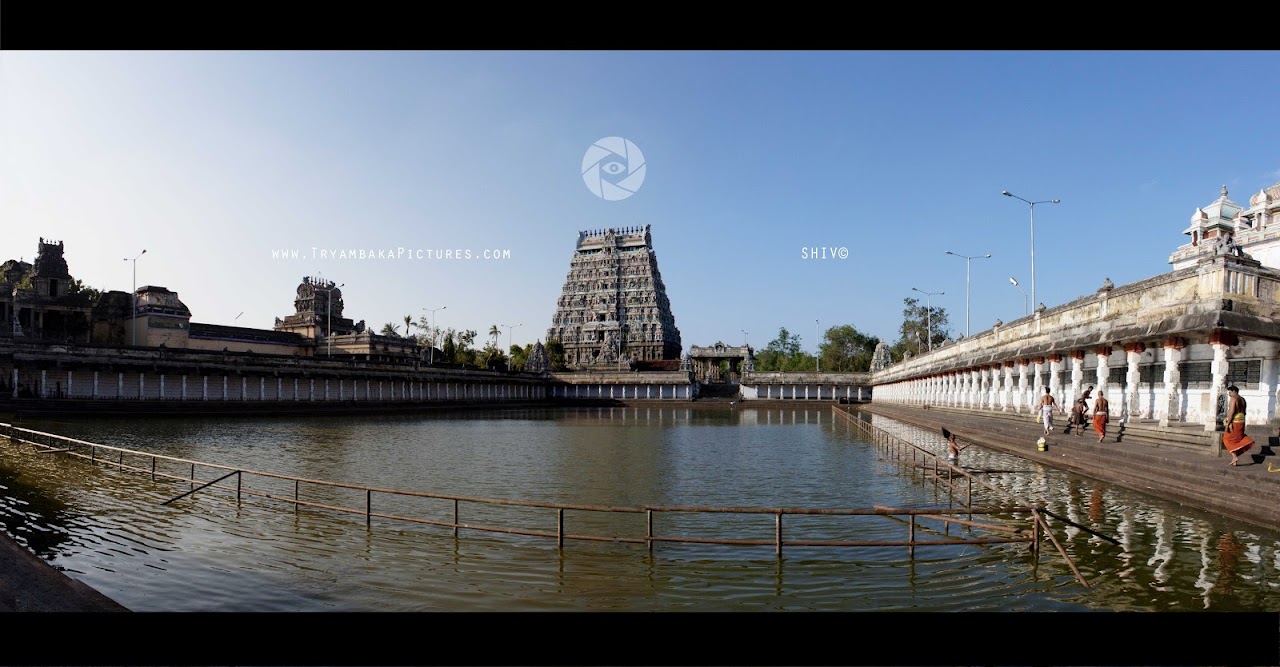 The temple has got the Golden Hall where young Bharathanatiya dancers display their hard-learned skill in front of a huge audience. I just tried to cover it wide and got the image with a stitch of 9 images.

Chidambaram is a great place to visit. But you need to know some key information. The temple is closed in the afternoon from 12 PM and is re-opened at 4 PM. There are also some other places nearby like Pichavaram, Port-Nova and Poompuhar. If you would like to visit all these places, I suggest you have a car so you will not have to waste time looking for a bus. Overall, I had a great trip with my parents and had an opportunity to closely worship Lord Shiva.