Besant Nagar is a name that is very popular among people here in Chennai and suburbs of Chennai. The place was named after Annie Besant who leaded the Theosophical society here. The place is home for Kalakshetra, the temple and academy of dance styles. Also, it is famous for the Ashtalakshmi temple, Arupadai Murugan temple and the all-time favorite beach.

I started off with the early morning sunrise with my bro Jaggy. We had gone there for a private shoot. I never did expect clouds early in the morning and to my surprise, the clouds were awesome that day. 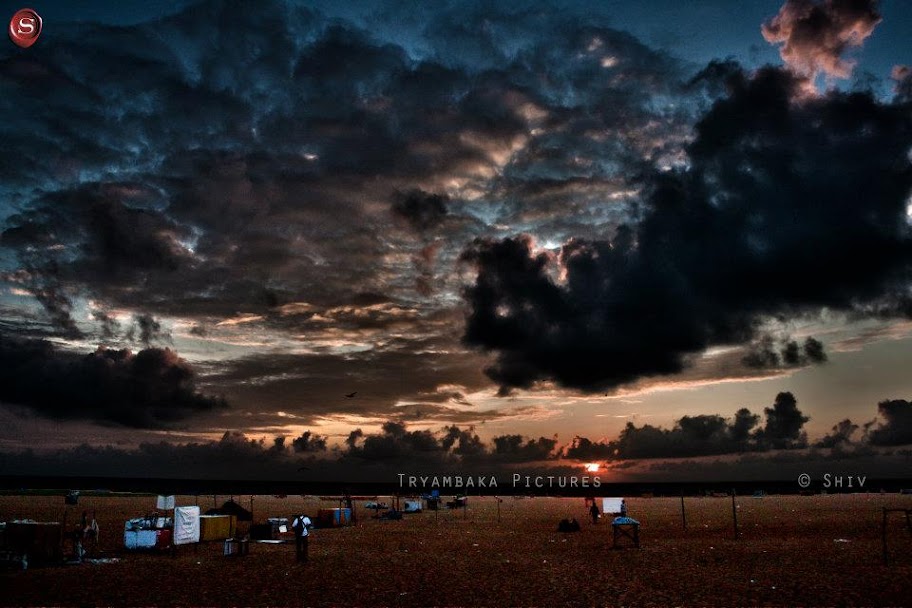 And every time we visit the place, Murugan Idli shop falls in our itinerary.  I like the food there so much but unfortunately not the cost. :D. Also I hate the way they charge for Idli podi (cereal powder mixed with oil as side-dish for rice cakes) and the very small amount of ghee pongal (delicious boiled rice cooked with ghee). 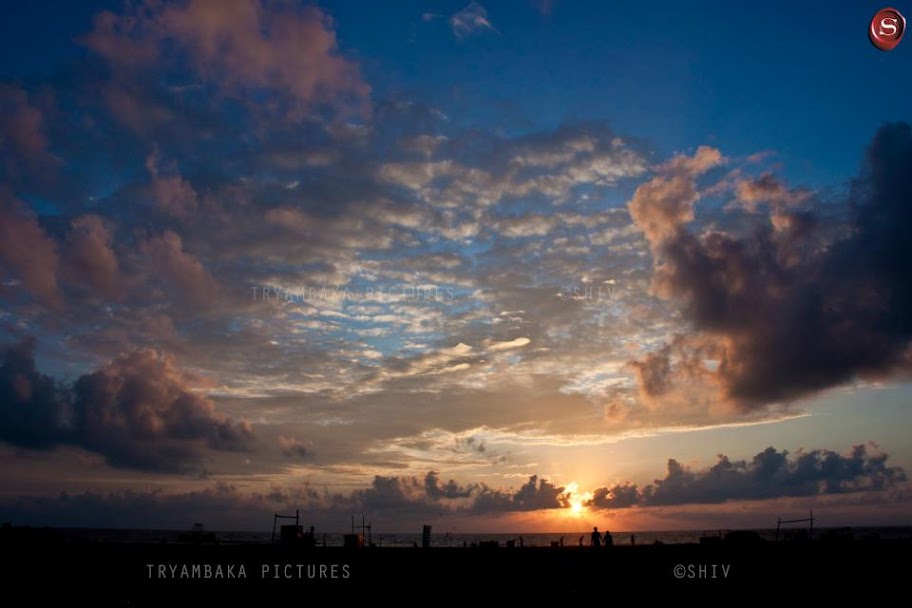 I also had some office work to do that day which would earn me a 1000 bucks.  Not willing to lose the 1000 bucks and also not willing to miss the place, I had gone there with my laptop borrowing the mobile internet dongle from Jaggy. You would have heard of “Work from Office”, “Work from Home”. Have you come across “Work from Beach”? Sounds funny, ha?! Yes, but I did connect from the beach. Luckily the work was scheduled one hour later and I again resumed my work with the camera and started clicking around. 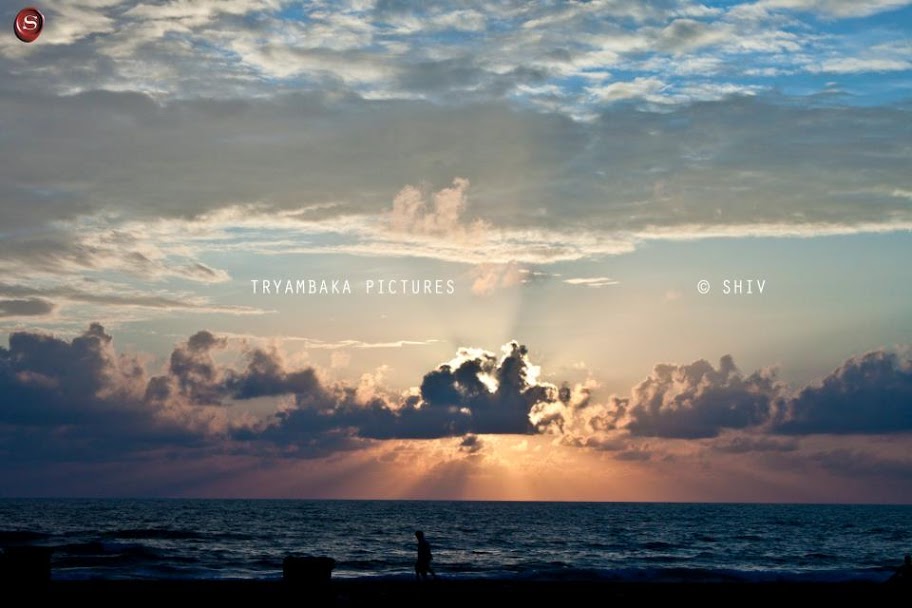 Finally, after spending some time there in the early morning breeze, we decided to move. I, however, still admired at the clouds and clicked another one below. 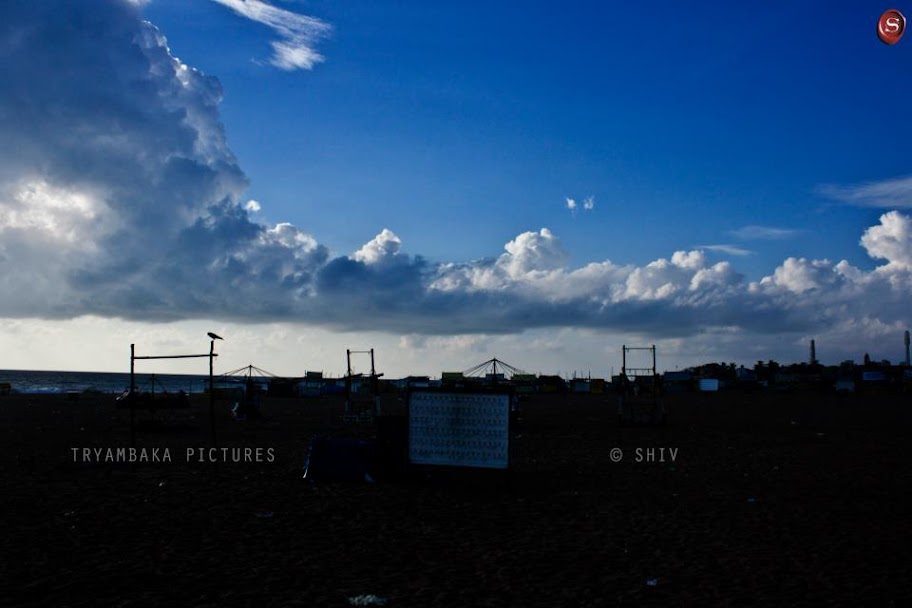 Photography is not about waiting for the right time and location to shoot a picture, it’s about creating a perfect picture at any time and location. Carrying my camera everywhere seems to be a good habit for me.I happened to visit my friends at a cricket match and got the below picture. 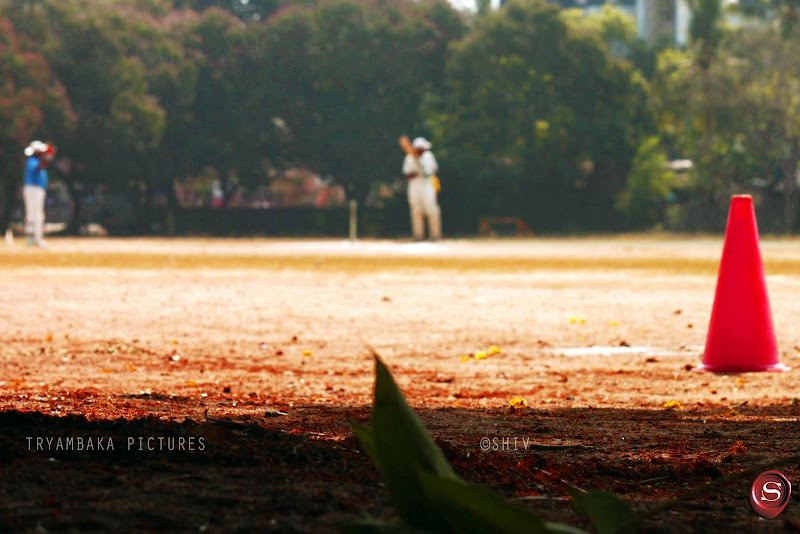 I had one day taken my camera to my friend’s place to show him. It was a bright sunny day until suddenly dark clouds formed to pour a shower and I clicked this picture from the fourth floor of the building. I was hoping for some lightning but got this. 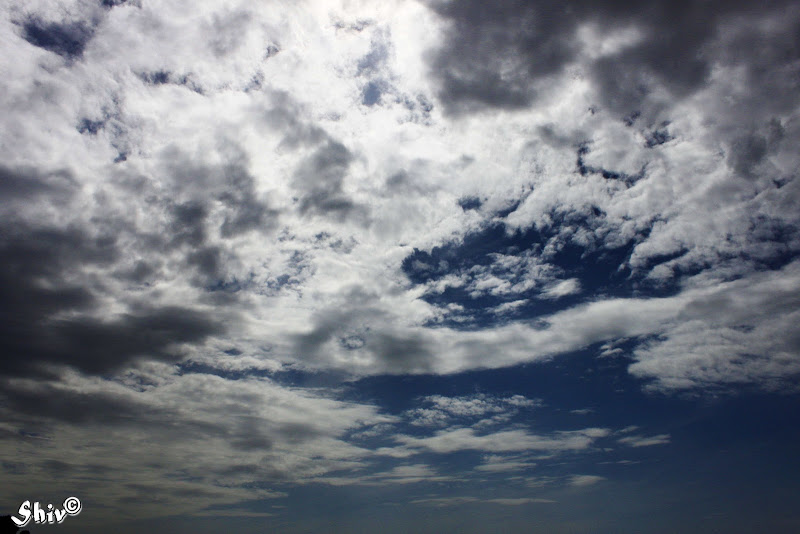 I tried a panorama at my favorite place, Muttukadu. It’s located in the East Coast Road (ECR), Chennai. This shows the boating area and a few buildings coming up in the background. This locality is tipped to become one of the costliest place to buy a piece of land.

My father was also very much influenced by my pictures and he took a snap of the bus stand at Madurai. It is really amazing that my dad took this picture with a normal digital camera. 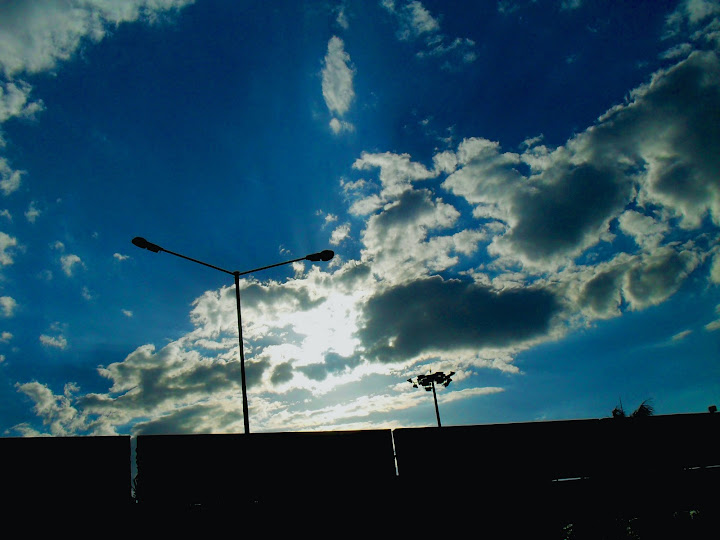 Kovalam is a small village nearly 25 km from Chennai along the East Cost Road (ECR). It’s one of the favorite destinations for the locals of Chennai. Kovalam has been an important place of production of sea salt in the region. You can swim and go up to some 5 km into the ocean with proper safety gear. There are boat men who can take you into the ocean but you will have to pay them good. There is also a fungi and plankton research center near the shore. 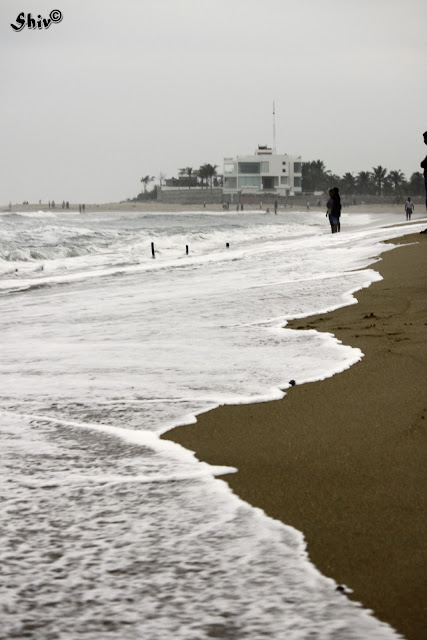 I had the opportunity to click the sunset at the beach. There are a lot of coconut trees near the beach. Below is one of the shots of the sunset. 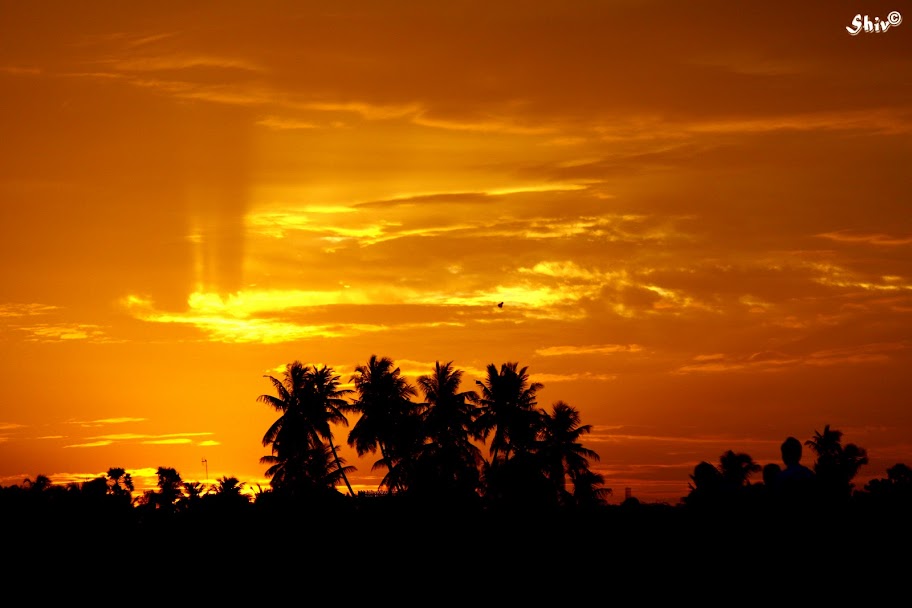 Two of my friends and I visited the place that day and one of my them held the helmet when I clicked the picture. The picture looks like a person carrying some sack like thing on his head. 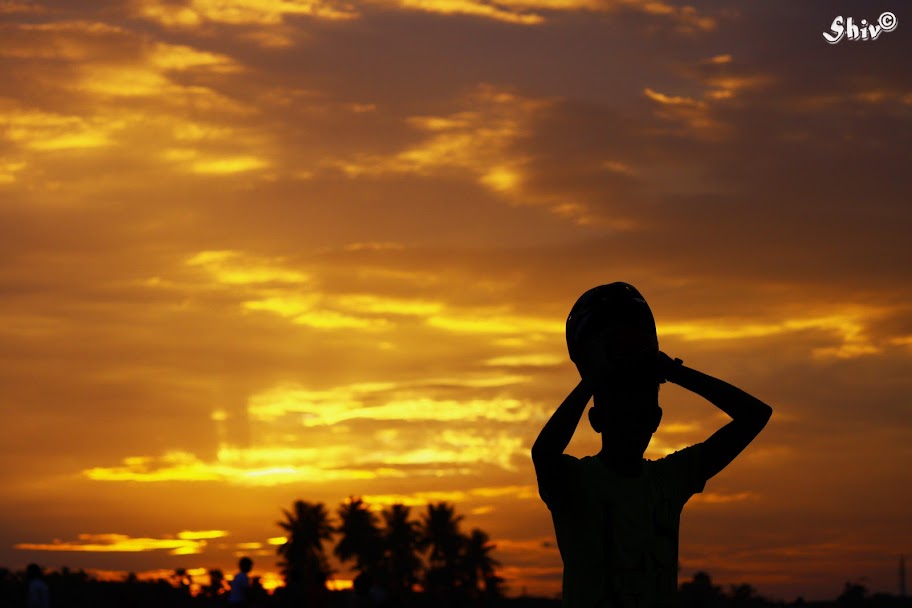 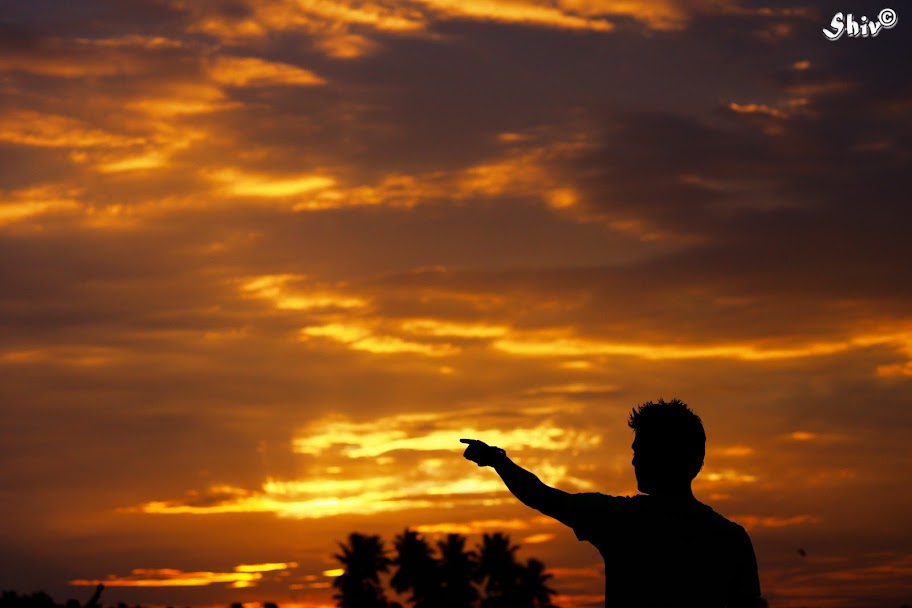 The day we went to the beach was a full-moon day. The tides were rough that day. I was wanting to get some good shots with the DSLR and was happy to have got the following pictures. 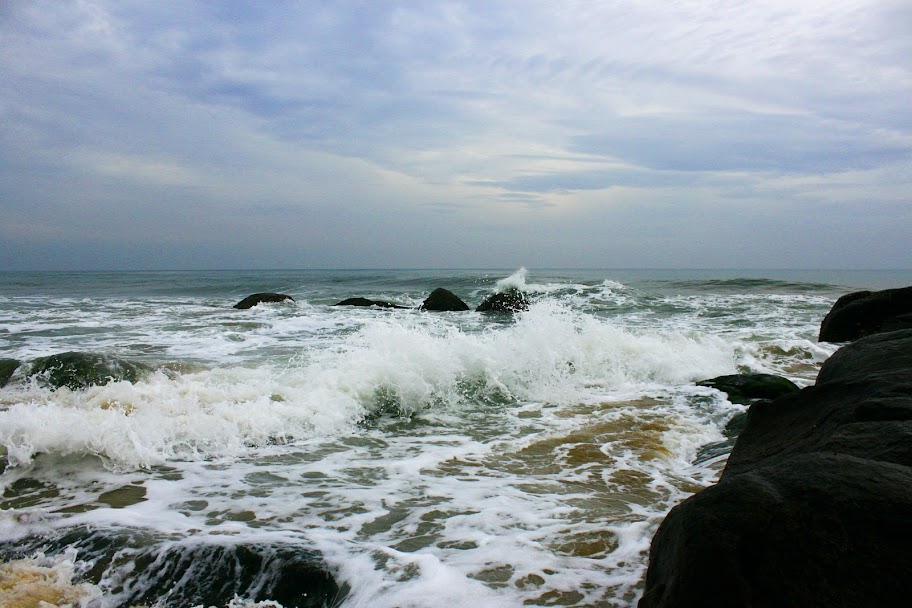 I held my camera near my knee and took the following pictures to get a nice click. The tides missed me very close and I luckily saved my camera from getting wet. 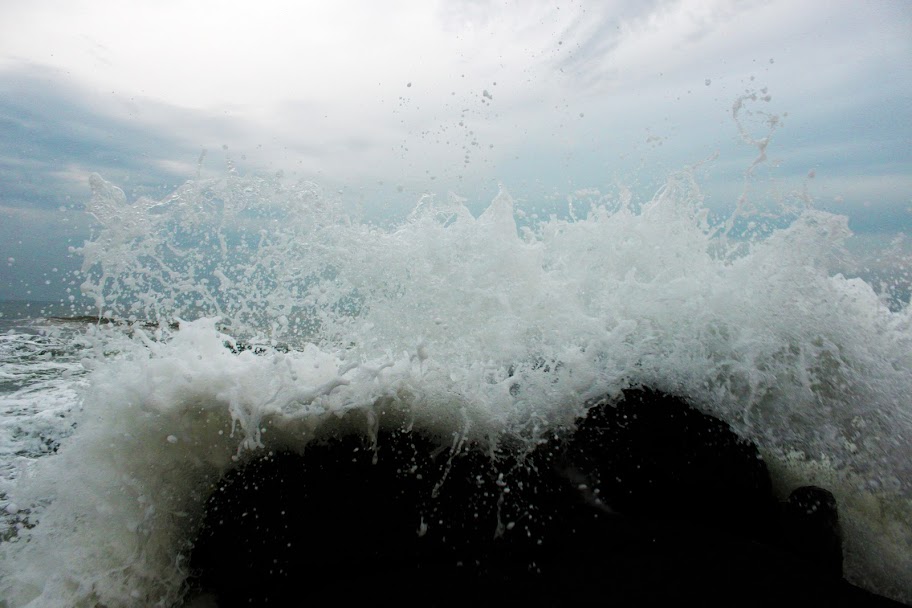 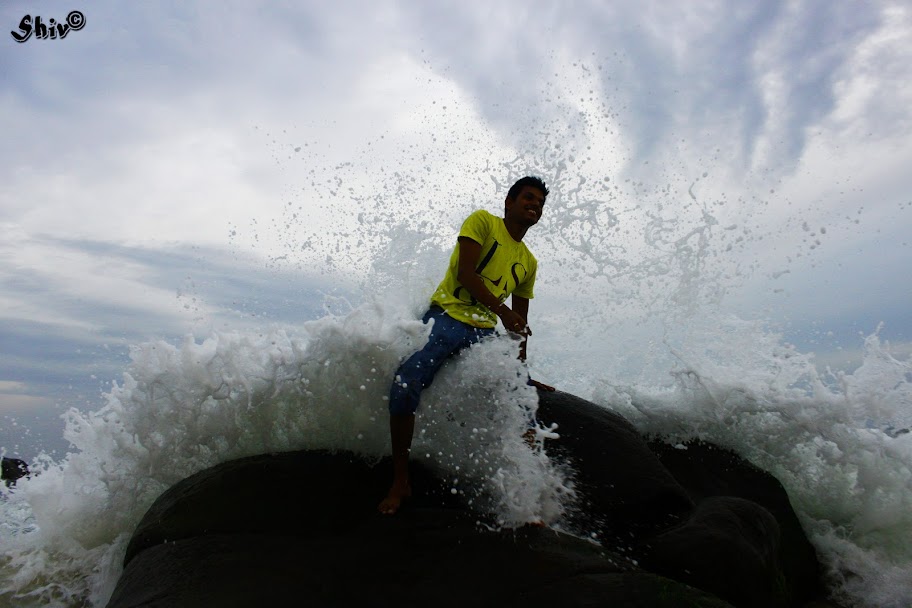 My friend wanted a good picture that day and enthusiastically climbed on this rock only to get hit and wet by the tides. He was so excited that he jumped from the rock shouting loud. 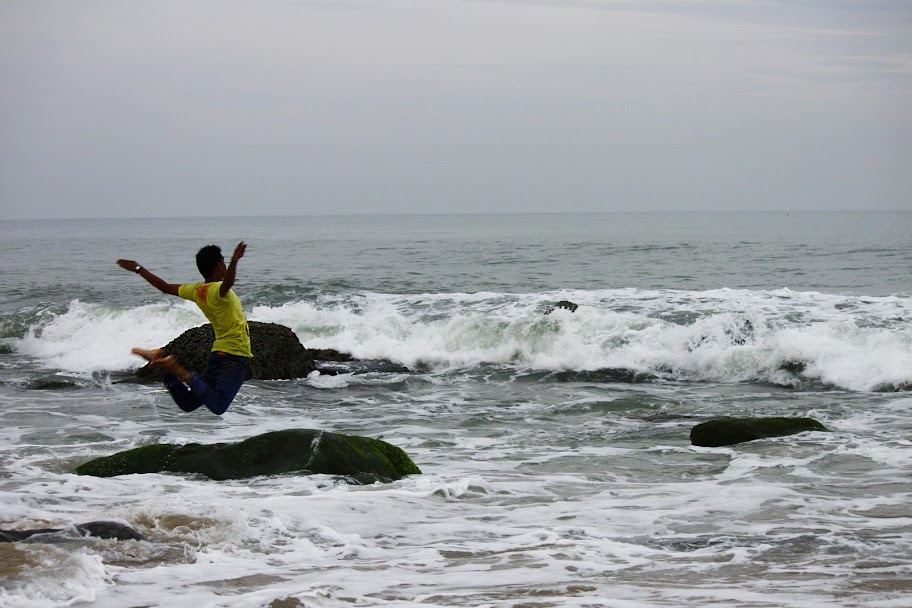 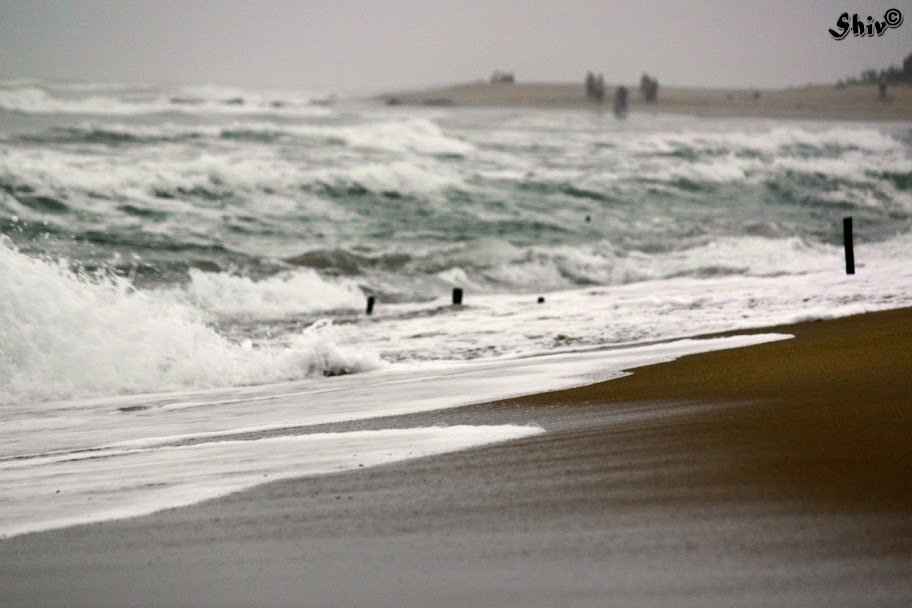 Eddie Cantor once said “Slow down and enjoy life. It’s not only the scenery you miss by going too fast – you also miss the sense of where you are going and why.” So, live your life happily. After all life’s once. 🙂

Mahabalipuram (Mamallapuram) is a port city near Chennai, TN, India. Mahabalipuram was a 7th century port city of the South Indian dynasty of the Pallavas around 60 km south from the city of Chennai in Tamil Nadu. The name Mamallapuram is believed to have been given after the Pallava king Narasimhavarman I, who took on the epithet Maha-malla (great wrestler), as the favourite sport of the Pallavas was wrestling. It has various historic monuments built largely between the 7th and the 9th centuries, and has been classified as a UNESCO World Heritage Site. For more information about the place, please visit the Wikipedia page

Mahabalipuram was my first one-day tour with my DSLR. The 60-kilometer drive by motorcycle was a nice experience in the early morning. After reaching, my friends and I walked straight to the shore temple. 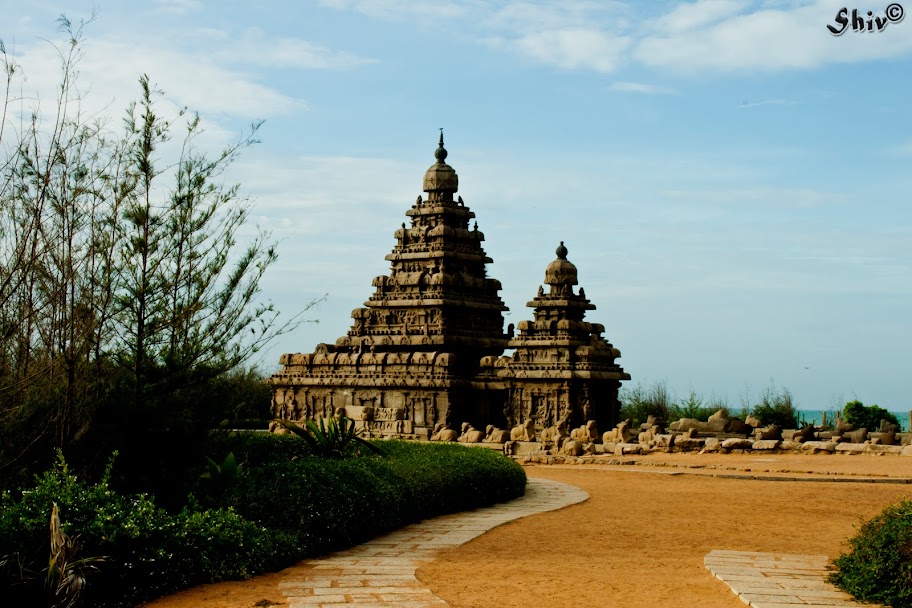 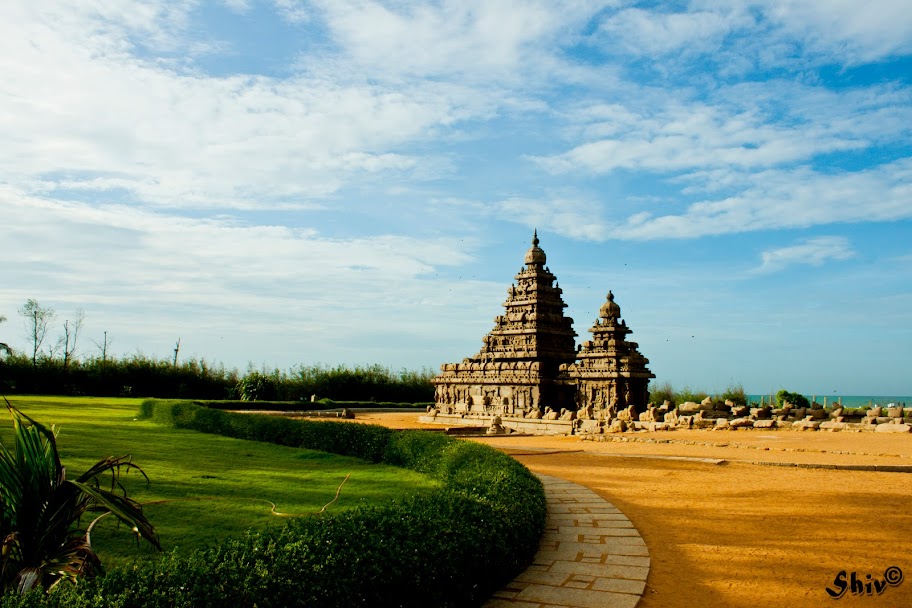 The clouds were beautiful that day and the cool breeze from the sea was very soothing and pleasant. I tried out some uncommon angles and got some cool pictures. 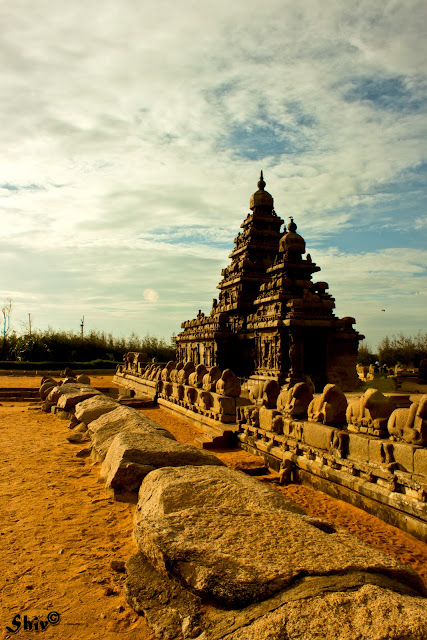 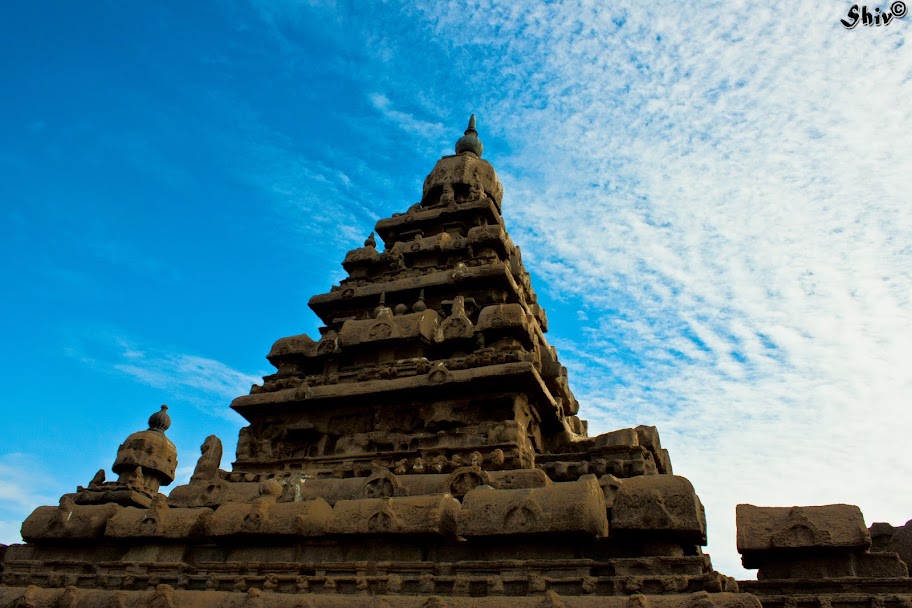 The below picture shows the “Butter Ball” at Mahabalipuram. Wikitravel quotes “Krishna’s Butterball is a giant natural rock perched on a hillside, seemingly in defiance of all laws of physics—it’s a common sight to see visitors placing hands under the stone posing for pics, which looks as though they are holding it! The rock provides welcome shade if you dare to sit underneath it, and local kids have discovered that the slippery nearby hillside also makes a great natural slide.” 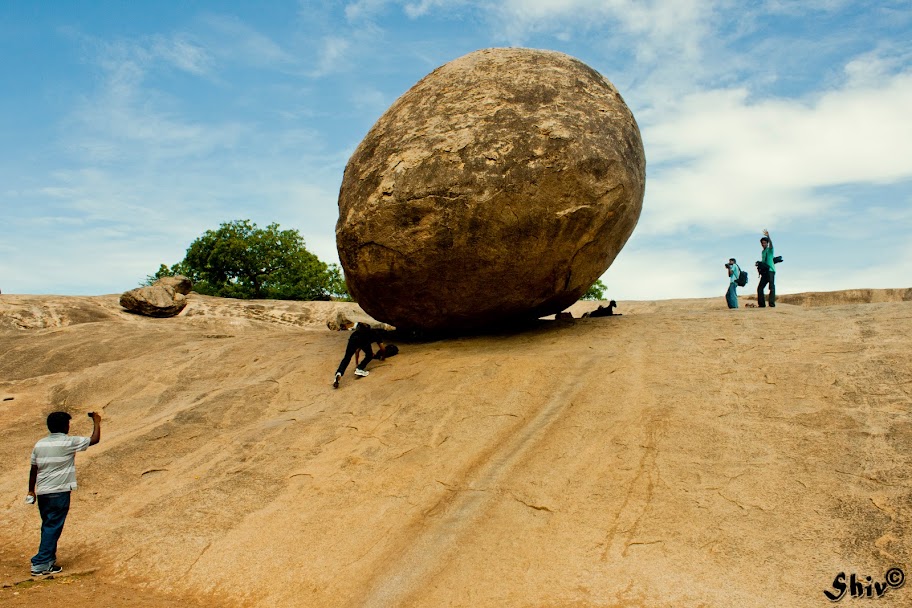 It is told that British rulers, when they had occupied and ruled Mahabalipuram, tried to move the Butter Ball using huge ships and failed to move it by an inch. This amazing natural rock simply leaves us all in awe. 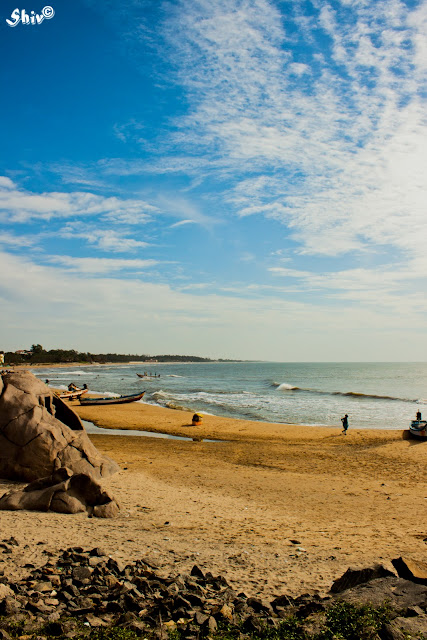 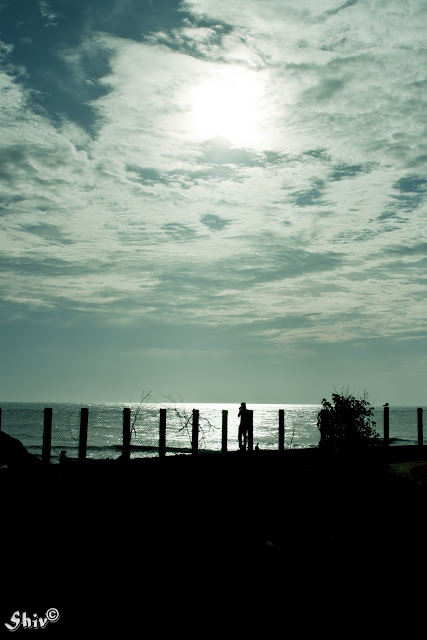 The below picture shows the Pancha Rathas (Five Raths), a monolith rock-cut temple from the late 7th century. The five monolithic temples are named after the Pandavas (Arjuna, Bhima, Yudhishtra, Nakula and Sahadeva) and Draupadi known from the Mahabharata, an ancient Sanskrit epic of India. It is not possible to cover all the five raths in a single frame. 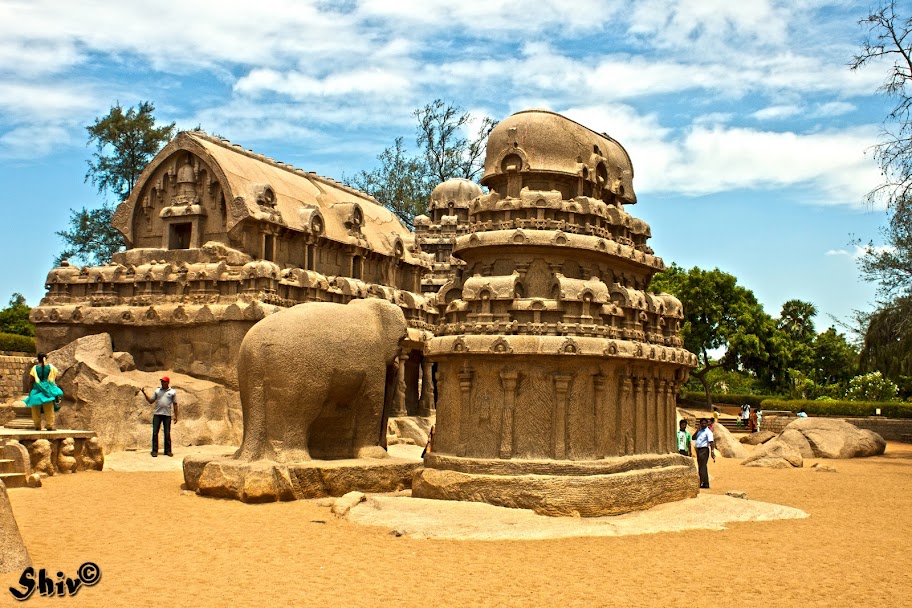 Below picture is one of the Pancha Rathas. 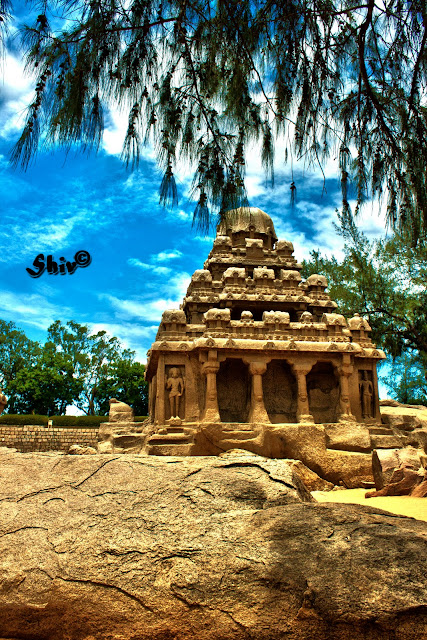 The first few days with my DSLR was very exciting. I tried with almost all the functions available in the camera to get familiar. To start off, I went to my garden at home and started clicking. I am not an expert at PS and I just played with the basics to adjust the color, exposure, etc,. Self-satisfaction is what I aim rather than other people liking it. After some 15-20 clicks, I had got some real good photographs. Sharing a few with you all! 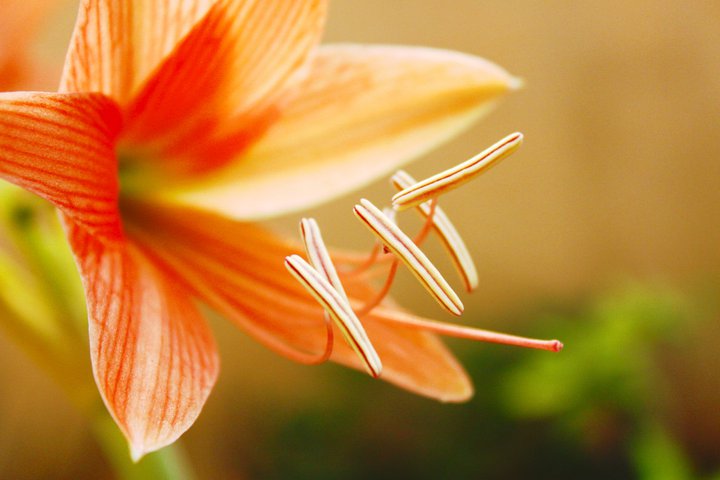 The above photograph taught me a basic thing that a bigger F number will fetch you more DOF (Depth of Field(s)). Perhaps, mistakes are the greatest way of learning things right. 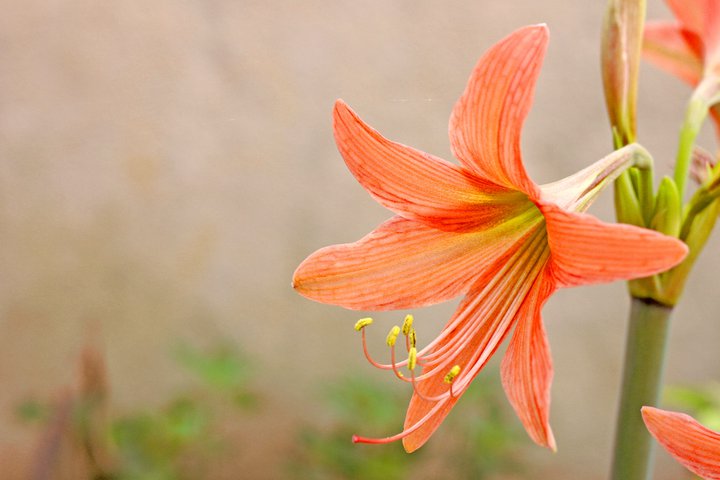